Price from: R620 adult half the price child under 12 yrs old 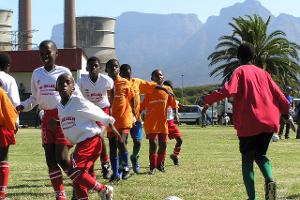 Soccer is the most popular sporting code amongst young and elderly people in township communities as such hosting perhaps the most spectacular sporting tournament in the world. It brought about smiles and tears in many people Even though many did not make it to the stadiums to see a game during the tournament, being hosts was a milestone. A couple of fields were built and upgraded with the aim to improve the development of the game in township communities * This township tour strives to bring out the history of football in South Africa. * The Athlone Stadium was nominated to serve as a training venue for the world cup finals. * There will be a brief history of local teams playing in the premier soccer league and their involvement in township football development. * This is followed by a braai (barbecue) in one of the township’s popular social venues - A chance to down a beer or soft drink mix and mingle with the locals in the love of the beautiful game.

Same place as pick up unless specified

Same place as pick up unless specified