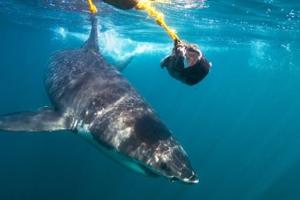 This is a unique adventure to view the most powerful predators of the Southern Oceans – the awesome Great White Shark.

YOUR DAY: You’ll travel to the picturesque Kleinbaai Harbour in Gansbaai and meet your highly experienced boat and shark cage diving crew. After a light breakfast and a briefing, you’ll travel by boat to the vicinity of Dyer Island where you will have once-in-a-lifetime opportunities to surface view or snorkel cage dive with this magnificent creature in its natural hunting ground.

NOTE: - This activity is weather and sea conditions permitting - Sightings of Great White Sharks are not guaranteed - Minimum 2 guests

DEPART CAPE TOWN – GANSBAAI: This amazing activity is worth the early start - we will leave from Cape Town at around 06h00 to get the most out of the day. Cape Town has a long history as a safe haven and rest stop for passing ships and traders. Renowned as a top travel destination, a pleasant Mediterranean climate and its peerless scenery, visitors to Cape Town quickly fall in love with the city. On our way out of town you might notice the distinctive gable design on some of the buildings; this is a characteristic of Cape Dutch Architecture, inspired by the Dutch farmers who first settled in the area in the 1600 and 1700s. We will travel eastwards out of Cape Town along the N2. We are at the start of the Garden Route, a stunning stretch of coast that extends for hundreds of kilometres across South Africa.

ARRIVE IN KLEINBAAI, GANSBAAI: The fishing hamlet of Gansbaai (meaning 'bay of geese' in Afrikaans) has become a popular destination because of the large population of great white sharks that make their home nearby. It is also a good location to whale-watch in the winter months as the Southern Right Whales make their annual migration to warmer waters to mate and breed. Gansbaai is a town with a long history and evidence of habitation as far back as 80 000 years ago has been found. More recently, a Khoikhoi community flourished in the region around 2 000 years ago. The modern town really came into being in the 1880s when nomadic fishermen began to settle in this region. For much of the last century, the Gansbaai community made its living through fishing, enduring good and bad times. In the mid nineties, the town began its rebirth as a popular tourist destination. Its position on South Africa’s stunning coast and close proximity to the Great White shark population make it a popular stop for day tours and longer stays.

MEET THE CREW AND HAVE A LIGHT BREAKFAST: After arriving in Gansbaai, we will make our way down to the Kleinbaai Harbour where we will meet the experienced boat crew that is going to lead you on your great white shark experience. The crew will run through the day’s activities with you and instruct you on proper boat etiquette. They will also give more insight into the Great White shark. Before setting out, we will enjoy a delicious light breakfast.

DYER ISLAND - THE GREAT WHITE SHARK: An adult Great White shark can reach over 6 metres (20 feet) in length and is the world’s largest predatory fish. Their primary weapons are the rows of razor sharp, and serrated, teeth that slice easily through flesh. They are also known to be able to launch their entire bodies clear of the water as a part of their hunting strategy. The Great White’s diet primarily consists of marine mammals, like dolphins and cape fur seals, as well as other sharks. They are usually migratory animals; however a high concentration of food has led to a large population staying off the coast around Gansbaai. Although the Great White is an apex predator and has been involved in attacks, humans don’t intentionally appear on the menu. Most times it’s a case of mistaken identity and they are not the monsters that the popular culture has made them out to be. They are graceful and imposing in the water - nothing less than perfectly adapted to their marine environment.

ON THE BOAT: The boat will leave from the Kleinbaai Harbour. As you head out to the open ocean you can look back on the spectacular coastline - filled with coves, caves and fantastic limestone formations that stand tall above the ocean. We are on our way to an area known as ‘Shark Alley’, reputed to be the best spot for Great White shark cage diving in the world. This is a small and shallow channel between the islands of Geyser Rock and Dyer Island where the Great Whites feast on the Cape Fur seals and penguins. The Great Whites are plentiful here thanks to this incredible abundance of food. The islands are located about 8 kilometres from Gansbaai and you can enjoy the sensation of being on the open ocean on the boat ride there. Geyser Rock is the smaller of the two islands and has a population of around 60 000 Cape Fur seals while Dyer Island is home to thousands of African penguins.

SURFACE WATCH OR SHARK-CAGE DIVE: We will anchor at the perfect spot to observe the Great White in its natural habitat. You can observe them from the deck of the boat as they hunt and glide through the waters. You may even be privileged to see a Great White breach as it launches itself out of the water. For the more adventurous, you can get face to face with the ocean’s top predator. Using nothing more than a wetsuit, snorkel and mask, you will climb through the top of a well-constructed cage. Here you can get an unmatched perspective on the Great White as they slowly circle the cage.

RETURN TO CAPE TOWN: After a day filled with wonderful wildlife, sea and sun we will make our way back to the Kleinbaai harbour. As you return to Cape Town in comfort and style you can reflect on the memories of a close encounter with the deadly and misunderstood Great White shark.

Shark Cage Diving Trip
Price: RSelect your package from the Book Now button above.
Duration: Between 4 to 5 hours