Things to do wherever you are!
Location:
South Africa / Eastern Cape / Amatola / East London 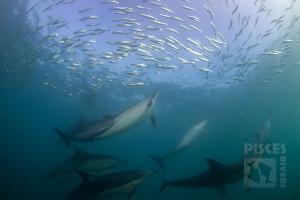 Billions of sardines migrate from the Agulhas banks up along the East coast following a cool counter-current which flows from west to east against the mighty Aghulas current, one of the worlds strongest currents. The fish follow this counter-current up to KwaZulu Natal where they spawn.

The shoals of sardines have been known to be as large as 7 km long and up to 1.5 km wide, and can be seen from airplanes or in some cases from the surface. Many of the world’s top marine biologists, wildlife photographers and filmmakers consider this the most intense wildlife event in the world.

This time of the year the Humpback whales migrate up the coast and they can be spotted daily, moving in pairs or small family groups. Southern Right whales can also be seen occasionally, but it is the Brydes whales that really get involved with the sardines and its an incredible spectacle to witness a lunging Brydes whale destroying a baitball in a single mouthfull.

We base ourselves in Cintsa near East London and launch our boats directly off the beach there, sea conditions permitting. On bigger swells, we divert to the East London harbour which allows a safe launch in almost any sea conditions.

Cintsa is a beautiful location and gives us an effective range of Hamburg in the West to Morgans Bay in the East, some 100km of Wild Coast coastline. Our hosts at Buccaneer’s Lodge ensure that our guests are comfortable in well-equipped suites a short stroll from the pristine beach where each days activities start shortly after sunrise. Meals are generous – full English breakfasts with lots of fresh fruit, excellent packed lunches for the day at sea and themed dinners with starters and desserts.

0630 – Breakfast overlooking the stunning Cinsta valley 0700 – Kit up and walk down to Cintsa beach 0730 – Launch boats just before sunrise 0730 to 15:00 – We spend the day on the water searching for visible signs of sardines which includes bird action and bird diving. During the quiet periods, we’ll scuba and/or snorkel with dolphins and whales. 1500 – return to beach at Cintsa 1600 – Late afternoon and evening at leisure. 1900 – Delicious theme dinner.

Flights Dive equipment other than cylinders and weight-belts (but can be rented). Alcoholic drinks

Dive Certification Card Towel and drybag for the boat Warm waterproof jacket, beanie and sunhat Sunblock and personal medications (such as seasickness tablets) Cameras (topside and underwater) Own dive equipment, other than cylinders and weight-belts

How fit do I need to be?

What skills do I need?